We’re all familiar with classic gambling pursuits such as Roulette, Poker, Blackjack and Craps. Most of these types of games date back centuries and continue to be played by enthusiasts all over the world.

However, in some parts of the world, civilizations and communities have taken a slightly unorthodox approach towards certain casino games; incorporating everything from animals to 4-sided spinning tops. In this article we explore the top 5 strangest casino games of all time.

War is one of the most famous and fun-filled card games of all time, generally played by children due to its simplistic nature. Believe it or not, this is a table game which can be found in practically every land-based and many online casinos.

The objective of the game is to win all of the cards; the player(s) place a bet and are dealt one card. If the player’s card is higher than the dealers, they automatically win the round. 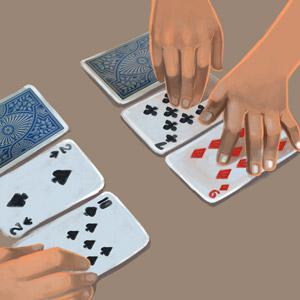 If there is a draw, the player can either forfeit half of the bet, or go to battle, doubling their stakes if their card comes out top.

This is the very basic version found in most casinos, however; there are multiple variations of the game that play to slightly different rules and exceptions to make it a bit more challenging.

Particularly famous among the Jewish community during the celebration of Hanukkah – Dreidel is played using a spinning top with 4 sides and is very similar to the European game ‘Teetotum’.

Each side of the spinning top bears a specific letter from the Hebrew alphabet i.e. Nun, Gimel, Hei and Shin, which collectively form an acronym for ‘Nes Gadol Hayah Sham’ meaning “a great miracle happened there”. 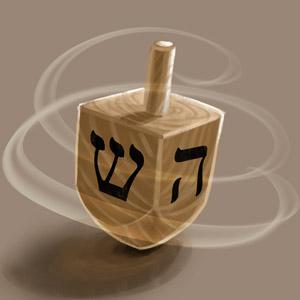 The game begins with each player homing between 10-15 objects that can be anything from chocolate to pennies, raisins etc. and every player puts one of these items into the ‘pot’, as well as at the end of each turn. From there, every player will spin the Dreidel once during their turn and depending on which side it faces determines whether the player wins anything from the pot. Nun: nothing, Gimel: everything, Hey: half and Shin: put in.

It’s a simple game, but one that is very traditional and played using cash in casinos these days. And it even has its own Major League in New York City!

This form of gambling is extremely unusual, and involves song birds resigned to cages, dotted around various parts of the casino floor. The players then have to place their bets on which bird they think will sing the loudest and for the longest period of time.

Each bird is required to sing when in turn, and as you can probably imagine, whichever one triumphs on both of those above things, determines the winner. Sounds a bit odd right? Well if you fancy squawking your way to riches, head over to Belgium! As this is one game you are very unlikely to find in an online casino, that’s for sure!

If you think the last one was weird – this one is even more off key! The reason being because you’re about to go head-to-head in a naughts and crosses game with… yes… a chicken.

‘Ginger’ is renowned for being a champion of this popular and historical game; touring casinos all over the US and taking down nearly every competitor in her path. Those who dare challenge the bird, simply have to approach her and make their move using switches, then patiently wait for her to peck around in her cage, before she hits a button that corresponds with the X,Y position on the tic-tac-toe grid.

A board then lights up highlighting both players’ selections; if Ginger loses the game, the victor can win up to a whopping $10,000! That’s a ‘no bird brainer’ if you ask us!

A much more exciting take on a standard Roulette wheel! Rodent Roulette is played using either a rat or more commonly a gerbil but has been known to use other variations too.

Like you would a traditional game, player’s place bets on an odd/even number, or colored pocket of red/black. Instead of the croupier spinning the wheel and dropping a ball onto it at this point, instead – a rodent is placed in a box on the wheel and eventually it will hide itself within one of the pockets/holes. 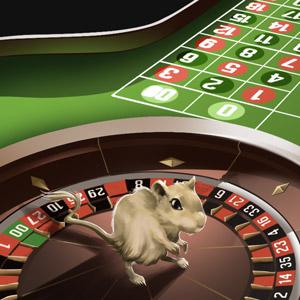 If the animal happens to hide in the one you selected, you’re the winner! To some people this game takes it a bit far and casinos have even had people detesting over cruelty and animal exploitation in the past, however; it is probably one of the most unique takes on a casino game, and overall harmless to the roulette rodent in question!

So there you have 5 of the weirdest casino games out there. If you’re looking for something a bit more conventional, Planet 7 has all the games you need, including table games such as blackjack, video poker, an out of this world selection of slots as well as a host of specialty games such as craps, American and European roulette, and more. Check out Planet 7 online casino today!