How to use Bitcoin

Most people keep their cash in a wallet of some sort and Bitcoin is no different. Well, that’s not completely true. Because Bitcoin is a digital currency, it’s not actually stored anywhere. Instead a Bitcoin wallet is used to store the private key needed to access your Bitcoin address and spend your Bitcoin. Wallets come in all shapes and sizes, depending on the device you use. It’s even possible to keep your key in paper form. The five most common types of wallets include: your desktop computer, your mobile phone, on the web, on paper and on external hardware.

What type of wallet you choose largely comes down to two key factors, convenience and security. Web based wallets are handy, as you can use them anytime, anywhere, but are fundamentally less secure. In the event your browser is compromised, your coins could be at risk. Desktop based wallets are the most secure but it’s essential to back up your hard drive because if it fails, your coins are lost. External hardware wallets are the ultimate in security. Commonly referred to as “vaults” external hardware wallets are akin to Fort Knox in a USB stick (more on that below).

The most common type of wallet is the desktop wallet, which is downloaded and stored on your computer. There are some 10 types of desktop wallets recommended by the Bitcoin Project, which run on a variety of platforms including Windows, Mac OSX and Linux with a wide range of different features, variously accentuating privacy, user friendliness or convenience. A few examples include:

Perhaps the most famous desktop wallet is the original Bitcoin client known as “Bitcoin Core”. It’s a piece of software you download and install on your computer. Once installed on your desktop, this software allows you to set up a Bitcoin address to send and receive Bitcoin and stores your private key, all while relaying transactions across the network. The downside of Bitcoin Core is that it comes with every Bitcoin transaction ever made, which takes up a bit of space, over 145 GB to be exact, and will continue to grow as the number of transactions increases daily.

Armory is a full wallet that requires the user to have installed the latest Bitcoin client and sits on top of it. It builds a mirror of the Bitcoin blockchain and takes over 78 GB of storage. Installation is time intensive, as it downloads a torrent of the blockchain and then syncs it with the network, which can take several hours. Once that’s done you’re up and running, unless you have your computer offline for a few days, after which it will need some time to catch up before you’re ready to go. Armory offers what’s known as “cold storage”, generating the public and private keys offline, with the public key then scanned into the online computer used to receive payments. Armory also allows you to keep paper back-ups of your encryption keys in the event your hard drive fails. It has long been considered one of the best, most comprehensive and secure Bitcoin wallets.

For those with limited storage space, the lightweight, simple and easy to use Multibit Desktop Bitcoin wallet is a favorite. It comes in at only 30MBs, allows you to open multiple wallets at the same time, shows you the latest USD – Bitcoin exchange rate, and you don’t have to download the entire blockchain. Multibit is an HD (hierarchical deterministic) wallet, containing a “seed” that is the master private key that connects to the public key to make a transaction. This means that no back up key is required, all you need is the 12-word mnemonic code to authorize transactions.

Created by German computer scientist Thomas Voegtlin in 2011, Electrum is another lightweight wallet that uses other Electrum users’ servers to quickly connect to the blockchain. Similar to Armory, Electron offers cold storage, and also supports Tor, an onion routing system, that effectively hides your IP address, to enhance privacy. However, full wallets like Bitcoin Core and Armory still rank higher in terms of privacy.  Like Multibit, Electrum is also an HD wallet and now supports multiple cryptocurrencies.

Launched in 2016, Exodus in not just a Bitcoin wallet but what’s now called a “blockchain assets wallet”. This means you can store a number of different cryptocurrencies in the same wallet including: Bitcoin, Litecoin, Etherium and 15 others. Designed to be easy to use, Exodus is rare in the cryptocurrency world for its sheer user friendliness.

Mobile wallets allow you to take your Bitcoins with you wherever you go to pay in real world, brick and mortar shops, and use Bitcoin ATMs. Mobile wallets definitely make it more convenient to use your Bitcoins but, unfortunately, with that added convenience comes additional risk. Walking around with thousands of dollars in your pocket is never a good idea, we all know shit happens, and a Bitcoin wallet is no different. You should only ever keep a small number of Bitcoins in your mobile wallet at any time and leave the rest in a more secure place.

Users have also noted that when it comes to retail transactions, the fact that Bitcoin is a relatively new technology can lead to problems, especially when it comes to the time it takes vendors to load payment apps and the fact that transactions do take time to approve. While the vendor receives immediate confirmation that a payment has been made, the actual verification of the payment can take 10 minutes or more.

Paying with Bitcoin at the counter in a brick and mortar shop has been said to be the equivalent of saying to the vendor “Thanks for the stuff! The checks in the mail!”

Nevertheless, with Bitcoin being widely seen as a revolutionary technology possessing a strong and growing following, more and more businesses, from restaurants and cafes to bars and taxi services are getting into the game and readily accepting Bitcoin. Here’s a quick overview of some of the more popular mobile Bitcoin wallets out today:

Also known as the “Schildbach Wallet”, Bitcoin wallet was the first mobile Bitcoin application, and designed specifically for use on Android. More secure than most Bitcoin wallets, you pay by scanning a QR-code and the merchant receives confirmation that a payment has been made instantly. The wallet is available for free on GooglePlay.

Mycelium is well known as one of the best and safest mobile Bitcoin wallets for Android and iPhone. It boasts “bank grade security” and is a good option for beginners thanks to its user-friendly interface and simplicity. Mycelium is the most popular Bitcoin wallet for Android.

Available for Android, iPhone and Windows Phone, as well as for the desktop. Copay is beautifully designed and allows users to set up multiple wallets, e.g. for business and personal use, with multiple users to monitor spending.  Copay is also an HD wallet like Multibit and Electrum.

Made specifically for iPhones, Breadwallet imitates the iPhone’s look and feel, making it extremely easy to use for iPhone aficionados.  With a touch ID to approve payments and the users fingerprint to actually send payments, it looks and feels like a normal extension of the iPhone OS, making it ideal for newbies and iPhone lovers.

Online wallets can be accessed via any device connected to the internet, making them incredibly easy to use and super convenient. There is a downside however, as phishing, malware and inside hacking means security is at risk and online wallets can be hacked and Bitcoins stolen. The Bitcoin exchange Mt. Gox unfortunately made headlines in 2014 after filing for bankruptcy protection stemming from a hack that saw it lose 850,000 Bitcoins (worth around $450 million at the time) and the Bitfinex exchange saw roughly $60 million in Bitcoin stolen in 2016. Two stunning examples of why online wallets pose serious security risks if you’re not super vigilant. Some of the more popular online wallets are:

Green Address is not highly recommended for newbies as its bells and whistles, intended for more experienced Bitcoiners, might be a bit overwhelming. The set-up security steps are a bit tedious but once you’re up and running, sending and receiving is simple and pretty much the same as with any other wallet. It too is an HD wallet and offers a Chrome extension for added security as well as four different types of two-factor authentication. GreenAddress also has a mobile app available in the app store or on Google Play, with most of the same features.

Spectrocoin is tailored to the European and CIS markets and offers an all-in-one payments service. Running on both Android and iOS, Spectrocoin allows for direct deposits for Eastern European clients as well as offers a Visa debit card denominated in GBP, USD or EUR that converts Bitcoin to local currency at the point of sale (see more on Bitcoin debit cards below). Fees, however, do apply, and in some cases, can be quite high.

Before hardware wallets (see below) paper wallets were the standard method of what’s called “cold storage”, or the creation of Bitcoin private keys that are stored in a safe, offline environment. Paper wallets are private keys printed on paper using a secure, offline computer. The downside of paper wallets is that you have to create and print a new wallet every time you send funds to cold storage. On top of that, be careful when cleaning house, throw away the wrong piece of paper after cleaning out your pockets and you’ll never see those Bitcoin again.

Hardware wallets are secure, offline devices used to hold your private key in “cold storage” and facilitate payments. They come is a range of sizes and shapes and are essentially impossible to hack, but like a small version of a real wallet, could be easy to lose. Hardware wallets are often referred to as vaults, akin to bank vaults for their super high level of security. The leading hardware wallets today include: 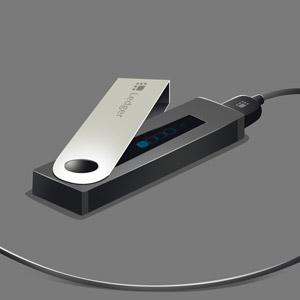 The smallest and cheapest of the hardware wallets with a screen, the Ledger Nano S is about the size of a standard USB stick and costs $65. To launch the wallet, you first create a four-digit PIN code. Then write down a 24 word “seed”, which provides access to your wallet once it is set up and your Bitcoin sent. Of course, anyone who has this 24-word seed has access to your Bitcoin so be careful what you do with that piece of paper. The device has two buttons that must be pushed at the same time to send a payment. It does not run on a battery and so is completely turned off unless plugged in via mini-USB, to add additional security. 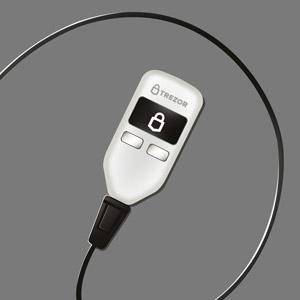 Intended for people who plan to hold a significant number of Bitcoin, Trezor means “vault” in Czech and was launched in the Czech Republic in 2014 as the first Bitcoin hardware wallet. The Trezor hardware wallet costs $99 but is well worth it if you want the ultimate in Bitcoin security. Basically, it’s a USB stick with a screen and an extra layer of security on all outbound Bitcoin transactions. It also features malware protection and disaster recovery in case of theft or loss. 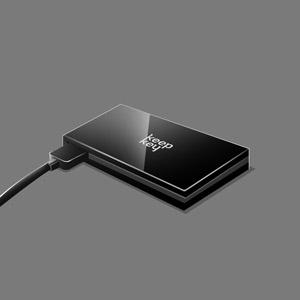 KeepKey was the second Bitcoin hardware wallet released and can also be used to store Ethereum, Litecoin, and Dogecoin. It is virus and malware proof, has a screen and works on PC, Mac, Linux and Android. All outgoing transactions have to be manually approved on the device to ensure you’re making the payments you want to make.