Most celebrities and soccer players sit on top of more money than they know what to do with, but that doesn’t mean they are in any way immune to the dangers of developing a compulsive gambling addiction. In fact, it’s even easier for these icons to get hooked on gambling over someone who does it purely out of financial desperation.

Sure, football players could just be addicted to the fun aspect of gambling, but more often than not, it’s just a counterweight for their excessive spending. Here are a few names in the football world that have suffered at the hand of gambling over the years.

George Best was one of the most looked up to sports personalities in the world during the 80s, but he also faced a tough battle when it came to gambling, sex, and drinking. For years he was a well-known force to be reckoned with on the pitch. As his health began to deteriorate, however, his flourishing career came to an abrupt end along with his own life when he died from alcohol abuse in 2005.

There are many football players known for being partial to a bit of poker and blackjack in casinos, but one of the biggest taboos in the sporting world is betting on your own matches. This is exactly what the former Man City left fielder, Joey Barton eventually got caught out for in 2016, after he placed more than 1,250 illegal bets over the course of a decade. He was given an 18-month ban and is now “essentially” retired.

Matthew Etherington is another player who has fallen through the ranks after struggling with a gambling addiction over the years. The star racked up close to £1.5m in debts since he joined West Ham. The club even loaned him £800,000 just so he could settle his debts, and it was only when he made the move over to Stoke City that he was finally able to combat his gambling habit and balance his finances again.

Paul Merson is one of the prime examples of how celebrity life can get out of control when the individual isn’t investing their cash wisely. The former midfielder was notorious for gambling, blowing over £7m in bets throughout his career. At one point, he even broke his own fingers to stop himself from calling the bookmakers and wagering on an Aston Villa game.

At just 17, Michael Chopra was just one of the many young players in football to develop a gambling problem when they started their careers. The Newcastle United striker was said to have had threats fired at him and his family on a regular basis, after borrowing thousands from loan sharks. Chopra says he lost close to £2million from card-playing sessions on the team bus, where the buy-ins for each hand were around £30,000 each time.

Domonic Matteo touches on his severe gambling addiction in his book In My Defense. His excessive tendency to place six-figure bets on various horse races is what eventually led to him betting his daughter’s inheritance, and consequently going bankrupt in 2015. On one particular race, he placed a single bet of £200,000 on a horse and won the bet. These days he is retired and has a much better handle on his gambling problem, but the same can’t be said for alcohol.

On October 1, 2010, Keith Gillespie was declared completely bankrupt by Belfast High Court after he accumulated over £7million in gambling losses and debts. He was already an apprentice with Manchester United at 16 but was already splashing his £46 a week at the bookies. By the time he was playing for Newcastle at 19, he was losing over 50 grand a week. He continued this habitual pattern until he eventually went bankrupt in 2010.

Bentley began his career with Arsenal, but instead of waking up every morning thinking about football, he was thinking about what bets he was going to place that day instead. As he started to earn more money from his glamorous career, he was placing between 50-100 bets a day which ranged anywhere from £100 to hundreds of thousands of pounds at a time. Fortunately, he managed to beat his addiction and has since been reunited with his love for football instead.

Professional forward player for Iceland and Chelsea striker, Eidur Gusjohnsen, admitted to becoming addicted to casino gambling when he lost £400,000 in 5 months. Though he may not have been placing five-figure bets like his team counterparts, he was known for dropping £2,000 worth of chips at a time on the roulette wheel.  Like others, he eventually managed to get a handle on his problem and now provides support and advice to warn others about the dangers.

Last but not least, Tom Williams was almost abandoned by his family when they discovered his secret gambling addiction that almost cost them their home. He was estimated to have incurred debts of over £1million by the time the bailiff knocked on the door. After his supermodel wife, Nicole McLean gave him the ultimatum of seeking help or her leaving with the kids, he finally stepped up to the mark and put his addiction to bed.

Even though we might scowl at the fact that footballers earn more money than we could ever dream of, they’re still just as susceptible if not more to the effects of money. Not all of them throw it away on gambling, expensive cars, houses, and other material gains either; most professional football players are highly charitable philanthropists that have done more than we could ever think to do for our healthcare systems, the education sector, and the overall economy. In a world driven by greed, filthy rich people with this kind of attitude are certainly hard to come by… 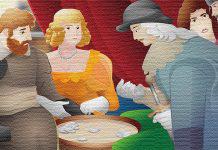