So you’ve made your way into a casino. You see the slots, the big jackpot games, the seductive Roulette wheel. But, wait. You know exactly where you’re going: to the Let It Ride table. Because once you know the right let it ride strategy for playing this lucrative game, you won’t want to play anything else.

In Let It Ride, your goal is to make the best five card hand possible. You start by placing your bet. You are then dealt three cards face-up. The Dealer holds on to the other two cards, which are left face-down. After seeing your three card hand, you can decide to wait to see the Dealer’s cards, or you can “let it ride” and match your original bet. After the first card is revealed, you can choose to see the next card, or you can let it ride for a second time, and place a third bet. If your final hand is a pair of 10s or better, you win. If not, the House wins.

Here at Planet 7, we’ve added some extra excitement to our “Let Em Ride” game: each hand, you’re given the chance to include a small additional bet that qualifies you to win some or all of a progressive jackpot.

Jim sits down at the Let It Ride table. He places a $10 bet. The Dealer deals Jim three cards: queen of hearts, queen of spades, and four of diamonds.

Jim’s a smart guy. He knows he already has a pair of queens, which means he’s going to win. So Jim lets it ride and puts down a second $10 bet. The Dealer turns over the first face-down card: a six of Spades. That doesn’t help Jim’s hand, but it doesn’t matter. He still has a pair of queens. So Jim lets it ride, and places his third and final $10 bet. The Dealer turns over the last face-down card: three of Clubs. No help, but no matter: Jim’s pair of queens pays out at 1:1 odds, and Jim is paid out $60. That’s a $30 win; go Jim!

But that’s just scratching the surface, because some hands pay out much, much more than 1:1 odds.

Of course the best way to understand Let It Ride (before we get into the serious strategies) is to try playing it. Try Let’em Ride for free now!

Let It Ride is a recent invention in the world of poker. Most casinos first introduced the game in 1993. The interesting thing about Let It Ride is that it wasn’t originally created to be a casino game, so much as to sell something: Let It Ride was invented by the Shuffle Master Company as a method of getting their automatic shuffling machines out on the floor.

Having this new exciting game that required shuffling was a great new way to launch a product, and one of the freshest, most intriguing new casino games was born. In 2003, things picked up even more when Let It Ride was adopted by online casinos, allowing players to enjoy the game in their own home, without needing to leave the couch.

Winning Let It Ride Hands, and Their Payout Odds

Let It Ride operates along the classic poker hand hierarchy: 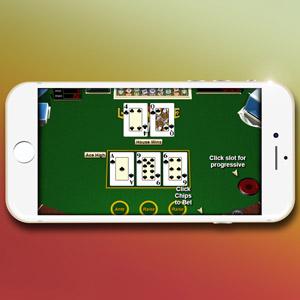 The simplest Let It Ride strategy is to know when you’ve won. If you have a pair of tens or better, there is no reason to not bet as much as you possibly can. If you have a winning hand from the start, your goal is just to maximize your payout; if something extra comes out of it as well (maybe a third ten to make three of a kind?) then all the better.

Once you’ve finished reading, perfect your Let It Ride strategy with a 200% Welcome Bonus. It’s a great way to feel the thrill of having actual real money on the line, without having to actually pay anything.

Advanced Let It Ride strategy for the standard paytable on Let It Ride is pretty simple, if you can remember a few simple rules. Again, the goal is to get any sort of payout from your hand, which influences your actions differently in every situation. With three cards, you should only let it ride if you have:

Again, check to see if you’ve made a winning hand: any winning hand will do. You don’t want to miss out on winning your fair share because you forgot to keep betting once you’d already won. With four cards, you should only let it ride if you have:

Let It Ride with a Jackpot

With Planet 7’s twist on the game, Let Em Ride, a progressive jackpot is added to the game for an extra bit of excitement and the chance at a huge payout. The best, however, is that this is no ordinary jackpot; it also pays out in chunks if your hand is a Flush or better. You can win the whole jackpot with a Royal Flush, or make a quick $75 from it with a regular Flush.

To participate in the jackpot, place the additional $1 bet at the start of each of your games.

Inside Straight: A Straight where one of the inside cards is missing. Only one card can complete this Straight. (Example: You hold a three, four, five, and seven. The only card that can complete your Straight is a six.)

Outside Straight: A Straight where one of the outside cards is missing. This Straight has two cards that can complete it. (Example: You hold a three, four, five, and six. Either a two or a seven can complete your Straight.)

Let It Ride: To match your original bet with another bet of the same amount. You cannot choose a higher or lower amount.

Face-Up: When a card is on the table for everyone to see. In Let It Ride, your first three cards are dealt face-up.

Face-Down: When a card is hidden. In Let It Ride, the Dealer controls the cards that are face-down. They turn face-up over the course of the game.


Hand: The cards you play with in a game of poker. In Let It Ride, your hand is made up of the three cards you hold, and the two cards the Dealer holds.

Suit: There are four suits in a deck of cards: spades, clubs, diamonds, and hearts.

Progressive Jackpot: The jackpot increases over time as more and more players pay into it. Depending on how long it’s been since the jackpot has been hit, progressive jackpots can get up into the millions.

There are many games to choose from when you’re in a brick-and-mortar casino, or playing casino games online. Let It Ride offers the thrill of the reveal on the fourth and fifth card, as well as high payouts on a good hand. Let Em Ride on Planet 7 Casino also includes a progressive jackpot you can choose to play for an extra shot at riches. The most important thing to remember in Let It Ride strategy is this: if you have a winning hand, keep betting. The more advanced Let It Ride strategy may take a little longer before it becomes second-nature, but keep practicing with virtual money for free, or play for real money on a 200% Welcome Bonus. Either way, try out the game and perfect your Let It Ride strategy. The longer you play, the better you’ll get.