Shots on the senate floor

We’ve all dreamt of doing it, and I’m sure a few of us have risked it once or twice. Most of us usually have a whole hour for lunch during the workday, so why wait until we’re off the clock? Maybe one or two of our coworkers will join to make it more fun – otherwise, no one has to know. Besides, it just feels so good. I’m not talking about indulging in some hanky-panky in the office supply closet (though that’s not so bad either); I’m talking about drinking on the job.

For the majority of US, UK, Canadian, Australian and South African citizens, boozing on the job is a major no-no, even during the blessed lunch hour. The days of Manhattan Mad Men and Roger Sterling’s mid-morning vodka martini are well behind us. But apparently, as with so many things, our legislators are a bit behind the times as well.

Now, we’ve known forever that lawmakers like to congregate at their watering holes after hours. In fact, lawyers are historically phenomenal lushes, but it sounds like some of the guys and gals who dictate the laws that could get you in trouble for drinking at inappropriate times are pretty sure said laws don’t apply to them. Let’s look at a few recent examples… 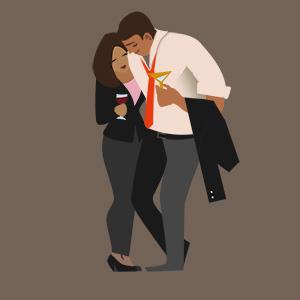 Providence, Rhode Island Democratic representative Moira Walsh recently told the Associated Press that lawmakers had “file cabinets full of booze” and they took shots in honor of the Dominican Republic’s independence day on the floor of the legislature. We all know of the deep historic connections between Rhode Island and the Dominican Republic, right? Didn’t they build The Breakers or do the laundry there or something? Clearly they deserve an official legislative Cheers!

“It is the drinking that blows my mind,” Walsh said. “You cannot operate a motor vehicle when you’ve had two beers but you can make laws that affect people’s lives forever when you’re half in the bag? That’s outrageous.” In response to Walsh’s statements, Rhode Island Democratic House majority leader Joseph Shekarchi claimed he has never seen anyone intoxicated on the floor or while voting. I guess it depends on what he means by intoxicated. “They were slouched in their chair you see, not drunk on the floor or able to vote…”?

Just one week after Walsh called out the practice of boozing in the capitol building, Rhode Island lawmakers again raised a toast in the legislative chambers to commemorate St. Joseph’s Day and St. Patrick’s Day. The alcohol choices were Bailey’s Irish Cream liquor and Chianti wine. The Irish and Italian specialties were obviously intentional – the Democratic House Speaker said it’s tradition for the legislators to celebrate various cultures. Those lawmakers are no dummies. With 196 recognized countries in the world today and some 4,200 different religions, all with their own holidays, that’s a whole lotta tradition and a whole lotta Cheers!  Reportedly they also clink glasses for Israeli Independence Day and the Day of Portugal – I can only assume that arak and port wine are offered on the legislative floor on those respective days… for diversity’s sake. 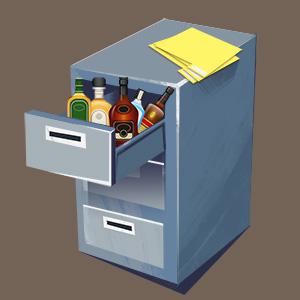 Although she recently “walked back” the comment about file cabinets full of liquor, Walsh stands by her other comments, saying she was under the impression that she would “come in here, kick down walls and make policies to help [her] neighbors.” Instead, she said, she feels like she’s “spent a lot of time applauding.”

Wrong. You don’t want that tour bus driver or pilot drunk on the job do you? Absolutely not, yet the issue of lawmakers making themselves exceptions to the rule seems endemic.

Rhode Island isn’t alone with the problem. Massachusetts pretty much banned their House of Representatives from meeting after midnight due to the tendency for late-night shenanigans. Excess and flagrant violations of codes of conduct that apply to the rest of us but for some reason not our law makers have led to alcohol being forbidden in several capitols buildings, including Oklahoma and Idaho.

My favorite by far is California, where the pattern of drunk-driving arrests of golden state lawmakers at one point encouraged the legislature to give its members free after-hours transportation. Too drunk to drive but not to make law. Besides, it’s after hours, don’t want to wake the wife to ask for that ride home! 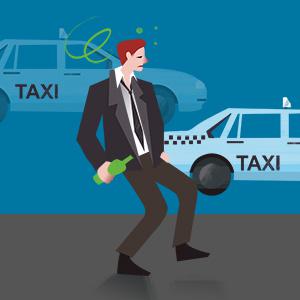 In a nut shell, California’s taxpayers were essentially funding the Uber rides their drunken lawmakers needed in order to get home. Once this sweet little secret got around, the perk was quietly revoked in 2015 in an attempt to garner public trust. I hardly enjoy ordering an Uber for my drunken self, let alone paying so an intoxicated public servant gets chauffeured home.

Get out of jail free cards

Speaking of perks, according to the National Conference of State Legislatures, “most state constitutions” grant immunity from arrest for legislators during an active legislative session. The immunity restricts law enforcement from arresting or incarcerating senators or representatives for anything less than “treason, felony, or breach of the peace.” And funny enough, attorneys.com states that a “DUI is a misdemeanor in all 50 states when it is the defendant’s first offense.” In other words, a first-time DUI is not a felony, an act of treason, or a breach of the peace. So, while the immunity isn’t technically meant to be used “to protect people who are accused of drunk driving,” it seems that due to its gray areas, sometimes it might be. I wonder what Mother’s Against Drunk Driving (M.A.D.D.), a group founded by a mother whose daughter was killed by a drunk driver, would think? They have more than one good reason to be mad.

Putting down the pints

But our friends across the pond enjoy the best perks by far. Legislators in Merry Olde England have a reason to be merry. You see UK tax payers actually subsidize their parliamentarians’ drinking. There are11 exclusive, subsidized parliament bars, which cost UK taxpayers millions of Pounds per year. With public pressure mounting after the British media exposed the spending, the House of Commons, the UK equivalent of the House of Representatives, quietly cut back on the subsidies… while at the same time freezing booze prices in their exclusive bars and voting themselves a 10% income rise. Must be nice having the power to determine how much you’re going to pay for a pint every time. 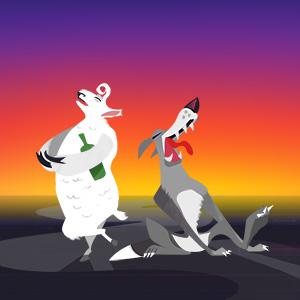 So, legislating and drinking go hand in hand in the way somethings never should, like a wolf walking into the sunset with a little sheep. While the world may not be ending, such behavior on the part of our law makers remains disturbing if not outright hypocritical. If you or I were walking into the sunset with that little sheep in one hand, we’d likely be hearing sirens behind us.

Not that we’re some kind of puritans here at Planet 7. Not wanting a doctor to operate on you while drunk is not the same thing as saying alcohol is a sin and a sip of the stuff will see you immersed in fire and brimstone for eternity. Some things, like college and after work and tropical holidays and casinos are made for drinking. You know what goes really well with a good drink? Gambling and a bit of fun! When you step onto the casino floor, everyone is aware that you’re there for entertainment. Unless you’re a professional card counter and need to focus on the count and the thousands of dollars you’re throwing around on each hand, you’re seated at the blackjack table for kicks. Your drinking isn’t likely to ruin yours or other people’s lives when you’re rolling craps for fun. No one is paying you to be serious and do something productive or make important, rational decisions for the common good. And if this is your unofficial job, you can do whatever the hell you want – you’re self-employed!

Plus, it looks way better getting into an Uber in front of the casino versus your office when you’re drunk. I imagine it looks even worse when you’re coming off the senate or house floor.

And drinking and gambling at home is an even better match! No matter where you end up passing out at the end of the night, you’re not going to get behind the wheel of your car, spend money on a ride home, or (hopefully) make any big, important decisions.

So, there’s no doubt there’s a great deal of hypocrisy at the top. Fortunately, while the paternal state goes on and on about morality, while boozing it up in their offices and drunk driving home, there are still a few places in the world you can take at face value. Places that don’t pretend to be anything other than what they are, fun and entertainment. Places where you can let your hair down, drop your guard, relax and have a good time. Welcome to the casino. Welcome to Planet 7! Whether you’re headed to the Vegas Strip or hanging in the comfort of your own home, gambling and booze have gone hand in hand since time immemorial with no hypocrisy involved.

So, go ahead and have a drink when you gamble (just never, never drive after). Flag down that waitress or head to your home made wet bar and whip yourself up a little something perfect and guilt free for that spree at the online casino.

Wondering what to drink with what game? Let’s take a little peek at what the pros say about what to tipple when you gamble…