Look for the rowdiest crowd in any casino and you’ll find them by the craps table – whooping and yelling and loudly enjoying every minute of every game. You might not have much luck quietening them down, but it’s very possible you’ll have a huge amount of luck at the table, and walk away a winner too. But what exactly is craps? How do you play it? Why does the table look so complicated? And WHAT is with that name?  Stay tuned as we reveal all the inside info you need to win with every roll of the dice.

The Game of Craps – A History

Firstly, let’s get the name out of the way. While today the game is known as craps, a dice game in which players bet on the outcome of each roll, originally the game was known as ‘crapaud’, the French word for ‘toad’. In its early days, craps was played on the floor, no fancy table needed, which meant people had to squat down in order to play – a position that gave them a distinctly toad-like appearance. So now you know. 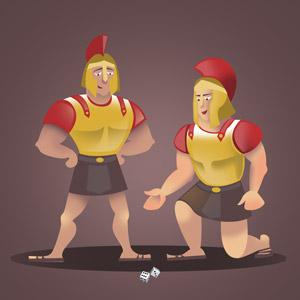 What you may not know is how far back the history of craps stretches – all the way back to the Roman Empire, in fact. While soldiers didn’t have access to modern dice, they were able to carve small cubes out of pigs’ knuckles instead, giving rise to the craps term, ‘rolling the bones’.

Later moving to France by way of returning soldiers from the Crusades, craps was known as ‘hasard’, derived from the Arabic game of ‘azzahr’, or ‘the die’. Having taken on a French influence, the game then migrated across the Channel to England, where it evolved into ‘hazard’ and quickly spread in popularity – so much so that mention of it was even made in Chaucer’s Canterbury Tales.

From England to the New World and then to New Orleans, craps moved even further across the globe, undergoing changes in order to make the outcomes fairer. With amendments made to the betting structure in the form of the ‘Don’t Pass’ option in 1865, the modern version of craps was born – the game that is still played in casinos throughout the world to this day.

But craps wasn’t done there. Not content with taking over the casino floor, it decided to take over cyberspace too, in the form of online craps. With the introduction of online gambling in the 1990s, craps underwent yet another transformation into a virtual game, opening itself up to a wider audience, and drawing new crowds just as excited, and just as eager to see what fortunes a single roll of the dice could bring. That’s why if you’re feeling lucky, there’s no need to travel to an actual casino anymore. Just open up your laptop, log on, and let the winning begin!