Games very similar to what we now call roulette have been around for centuries, and their origins are very difficult to track. Its current, most popular form was first adopted and designed by a French physicist, inventor and mathematician, Blaise Pascal, back in 1655.

Roulette is all about odds, simple physics, and statistics. The word roulette literally means “little wheel”, so it should come as no surprise that the spinning roulette wheel was invented by a well-known gambler and math wizard. However, what Pascal was actually trying to invent was a perpetual motion machine, and not a casino game.

For the non-science minded, a perpetual motion machine is a device that continues to operate without drawing energy from an outside source. A popular scientific endeavor at the time. Though he failed to invent such a machine, and one has yet to be invented, Pascal’s failed experiment gave birth to one of the most popular casino games in existence.

How to Play Roulette

Today there are three variations of the game: American, European and French roulette. In roulette players bet on single numbers or a range of numbers, the colors red or black, odd or even numbers, or high (19–36) or low (1–18) numbers.

The winning number and color is determined by a croupier who spins a wheel in one direction, and spins a ball in the opposing direction around a track along the edge of a moving wheel. Once the ball drops, it falls into one of 36 colored and numbered pockets on the wheel, or a green zero pocket (American roulette also uses a double zero pocket). If the ball lands on any number (or zero) accurately predicted by the player, the player gets a payout based on the type of bet made. As roulette remains a game of chance, placing wise roulette bets remains the best way how to win at roulette.

Now that you’re caught up with the history of the game, let’s go over the betting so you can learn how to win at roulette! Roulette tables usually have their own chips, and each player is designated different colored chips so the croupier will know who to pay and who to take. Before you start playing, be sure to take note of the minimum bet posted at the roulette table. The average minimum bet for most casino roulette tables is $5 or $10.

The roulette table is divided into two parts, inside and outside. The minimum bet for the table is generally the same (with some exceptions) for the inside or outside of the table with one key difference. Betting inside the table allows the player to spread out their minimum bet over a range of numbers, whereas betting outside requires that each bet be made to equal the minimum.

For instance, let’s say the minimum bet at a table is $5, an inside bet must be made that adds up to $5, e.g. one dollar chips can placed on a given number or range of numbers as long they add up to the minimum; whereas an outside bet must be made to equal the minimum (in this case $5) for each time the player bets. Players can bet on as many numbers as they like on each turn, and multiple identical bets can be made by players simply by stacking chips. Just keep in mind that the more you bet, the more you potentially have to lose.

There are a variety of ways a player can bet inside of the table. Below is a list of the type of inside bets:

There also are a variety of ways a player can bet outside of the table. Below is a list of the type of outside bets:

There is a form of betting utilized by French and European roulette tables known as French or called-bets. These bets refer to specialized sections of the roulette table that have names designated to them. They are represented by corresponding numbers and phrases on an ellipse. These bets are Voisin du zero, Orphelins and Tiers du Cylindre and they are based on each particular segment’s proximity to zero, the numbers within the ellipse function in a similar manner.

The house edge is determined by one simple factor, which version of roulette you are playing. European and French roulette wheels, have one green zero slot. As there are 36 numbered slots and straight up bets pay 35:1, this green slot gives the casino the house edge. Without the green slot, the expected takings from the table earned by the casino would average out at zero, and there would be no point in running the game. This was first utilized in the mid-19th century by the king of Monaco, and was adopted later on by various casinos in Europe.

In American roulette the payout odds are the same, but instead of one there are two green slots on the wheel; these are zero and double zero. These zeroes are marked on the table for every variation of the game, and just like the numbers, they correspond with the zero(s) on the wheel. The addition of the double-zero makes it twice as likely for the ball to land in a green slot on the wheel, and therefore the house edge for American roulette is higher; a major disadvantage to the player. Unless you’re betting on zero, all wagers lose when the ball lands on green.

The calculation of the house edge goes as follows for American roulette:

And for European or French roulette:

The only difference between European roulette and French roulette is the payout to the player when the ball lands on zero. When you make an outside bet (odd/even or red/black bets or any other bets paying 1:1) and the ball lands in the green slot in French roulette, half of your bet is returned to you. This is known as La Partage or the share rule. It has even been adopted in some casinos around the U.S. (most notably in Atlantic City).

How to Win at Roulette

Stick to the Outside

As a rule of thumb, especially for beginners, it is good to stick to betting outside the table. Though the profits may not be as large, they are statistically more consistent. Keeping your bets on red/black, high/low, or odd/even ensures that you have a less likely chance of losing your money, since you are given 1:1 odds. This does not necessarily grant a large return on a short game, but in the long run it’s much better for your bankroll.

Though the house edge doesn’t change with this strategy, your odds of winning may increase simply because betting e.g. red and odd has a higher percentage of coming up instead of betting a single number or small range of individual numbers.

It’s simple, double up. If you are betting black instead of red or odd instead of even, you should follow this strategy: each time you lose, double up the amount you lost the first time, and proceed to bet on the same color combination until you win. This is called the Martingale Strategy.

If your first bet is $5 on red and it lands on black, your next bet should be $10 on red so that you can try and win your money back to make a profit. If it lands on black again, double your amount again, betting $20 on red. Continue doing this until the wheel lands on red (which it inevitably should), to win your losses back and gain a profit. This is of course isn’t a guarantee, just a simple matter of probability.

Generally speaking, consistent betting and doubling up should only be done if you can afford it. And starting with the minimum bet, instead of betting large is recommended when trying this strategy.

This is a variation of La Partage generally only applied to European wheels. It’s a rule that brings down the house edge to 1.35% on even money bets. And here’s how it works:

After a loss a player may be given the option to place their original stake en prison or “in prison”. The stake is left on the previous bet, and the croupier places a marker on it to show that it is being held. If the bet wins on the next spin, the player’s stake is returned.

In other words, if you bet $10 on black and the ball lands on zero the house keeps your $10, once the ball spins again if it lands on black, you get your $10 back. You don’t win anything, but you get to keep your original $10!

A Game of Chance 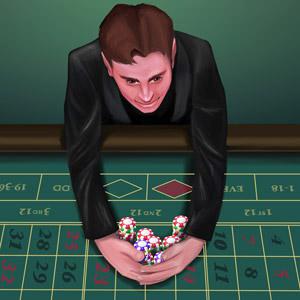 Whatever the version you decide to play or how you bet, there is no absolute winning strategy. The outcome of where the ball will land is a matter of chance, which is what makes roulette such an easy game to play for beginners. There’s an old saying concerning roulette, “the wheel has no memory.” This means that if say black comes 10 spins in a row, the next spin is not more likely to be red. Black and red still have equal chances of hitting on any given spin.

It’s also important to note that since roulette has one of the lower return percentages compared to most casino games, it’s best to play a version of the game that enforces the share rule (previously mentioned) or online versions that have similar rules of play.

Just remember to keep these helpful tips in mind to increase your chances of how to win at roulette:

Pay to Play or Just Have Fun!

Roulette is a great game that offers the thrill of winning for even the most novice of players. If you’re keen on testing your luck Planet 7 Casino offers this excitement to you with our American and European Roulette games online! Take the information we’ve given you and practice your skills today. All of our games come with free practice or fun play.

So, now that you know how to play roulette and win, once you feel comfortable playing or have even mastered the basic skills of the game you can play for real money. So why not have some fun and register with Planet 7 Casino for a chance to win serious cash today! See you at the roulette tables!