We all know the chicken and the egg question. But we have a new one for you: what came first – gambling or mathematics?

The latter is much easier to answer than the former, but it is an interesting question nonetheless. While mathematics is a broad subject with branches that are pretty much ancient, there are facets of it that are much newer than others. And, in the case of probability theory, gambling is not only older, but was actually the inspiration and motivation behind its development.

So, let’s wade back through time for a brief look at the beginning of the relationship between gambling and mathematics…

Playing Dice in the Renaissance

Back in the heady days of the Italian Renaissance, refined men infused with this spirit of revival were known to be many things at once. Take the case of “Renaissance man” Gerolamo Cardano. Born in Pavia, Italy in 1501, the illegitimate child of a noted lawyer with a talent for mathematics who was a close friend of Leonardo Da Vinci, Cardano grew up in an environment steeped in learning. A true polymath, he was a physician, physicist, biologist, chemist, astronomer, philosopher, writer, and above all a gambler. 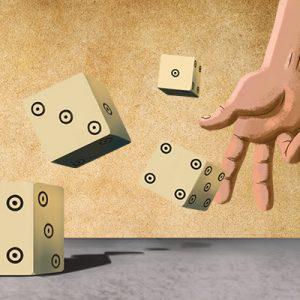 After squandering his inheritance, Cardano decided the best way to make a living was by gambling. His games of choice? Dice and chess. Learned as he was, he wasn’t going to leave his income to chance and set out to meticulously study what today we would call probability theory. Cardano quickly realized that chance events could be analyzed mathematically. As a result, he worked out how to calculate the likely outcome of seemingly random events, like a throw of the dice, developing what became known as “Cardano’s formula”. He went on to elaborate his observations in the book Liber de ludo aleae (“Book on Games of Chance”) written around 1564. It was the first written book on probability theory, but not the first published. Trials and tribulations, including the beheading of his eldest son after being convicted of poisoning his wife, his second son turning into a degenerate gambler and being disinherited, his own arrest by the Inquisition and several months in prison, and plaguing allegations of sexual improprieties with his students spread by jealous colleagues, meant publication of his book had to wait. It was finally published posthumously in 1663, as probability theory came into vogue in intellectual circles across Europe.

In 1654, a French nobleman named Antoine Gombaud, Chevalier de Méré reached out to a famous French mathematician named Blaise Pascal about a mathematical contradiction concerning a dice game that was popular during the time. The game involved throwing a pair of dice 24 times, and players bet money based on whether or not a “double six” would show up. Chevalier de Méré was convinced that it was a good bet, but his own calculations had proven him wrong.

This question and others posed by Chevalier de Méré led Pascal to begin correspondence with another famous French mathematician, Pierre de Format. In a series of letters between the two, the core principles of probability theory were hashed out for the first time – all based around the theory in relation to games of chance.

This discussion between Pascal and de Format around 1654 was discovered by a Dutch scientist named Christian Huygens, who went on to publish the first book ever written on probability just three years later in 1657. De Ratioiniis in Ludo Aleae was a systematic work which discussed problems and probability theory associated with gambling. And, because of the popularity of games of chance at the time, probability theory soon also gained popularity and rapidly developed during the 1700’s.

The Ascent of Probability 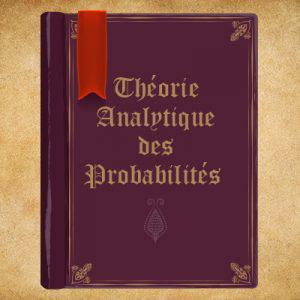 In 1812, Pierre de Laplace wrote a book titled Théorie Analytique des Probabilités, in which he introduced new ideas and techniques associated with probability theory. Before Laplace, all work relating to the subject concerned gambling and games of chance, but Laplace applied probability theory to scientific and practical problems, greatly expanding the uses for the subject.

By the early 20th century, probability theory had become a significant branch of mathematics, led by the Russian mathematician Andrey Nikolasvich Kolmogorov, with his 1933 book Foundations of the Theory of Probability and had laid the foundation for statistics, the quantitative analysis of large sets of data and much of the underpinnings of the modern age.

Today, probability theory can be applied to a wide range of subjects including, but not limited to, genetics, psychology, economics, and engineering. This branch of mathematics that began as a way to understand, and win, when gambling, broadened into a subject that worked its way into numerous aspects of daily life, and helped people understand the world around them a whole lot more.

So, the next time someone criticizes you for gambling, just remind them that if it weren’t for games of chance, a huge and important facet of mathematics may have never come to be and the world as we know it a very different and far less dynamic place.

Head to Planet 7 Casino and try probability theory for yourself!