Blackjack is the most widely played casino game in the world. It’s the game that has inspired countless books, movies, and television shows, both fictional and true. The initial appeal in blackjack comes from the relative ease of gameplay and the fact that players compete with only the dealer, but the biggest draw to this casino game lies in the fact that through the power of mathematics, blackjack has been proven to be beatable. Perfect execution of basic strategy makes blackjack a profitable game, and that’s something that players all over the world have become enamored with. It might even be the reason why you’re here.

If you’d like to start winning real money playing blackjack, read on, my friend. We’re here to tell you what you need to know to make this game work for you.

The History of Blackjack

Blackjack is a card game beloved by millions all around the world and a game that’s been around for more than a few years. In fact, the ancestor of blackjack was known simply as “twenty-one,” and the exact origins remain unknown.

However, the first written reference can be found in Novelas Ejemplares, a book written by Miguel de Cervantes, the Spanish author who penned Don Quixote. In the story titled “Rinconete y Cortadillo”, the main characters are a pair of cheats living and working in Seville, Spain. The pair are talented at cheating at a card game known as ventiuna, Spanish for “twenty-one.” In the story, the characters state that the goal of the game is to get to a total of 21 without going over, and that the ace can either value 1 point or 11. Unlike modern blackjack, the game was played with a Spanish baraja deck, which didn’t include eights and nines.

Novelas Ejemplares was written between 1601 and 1602, which implies that ventiuna was played in Spain at least since the beginning of the seventeenth century, possibly earlier. Later, the game is found in references in France and other regions of Spain. 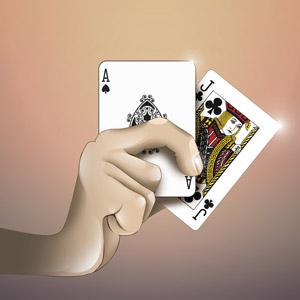 However, the popular game didn’t receive the name “blackjack” until it was brought over seas. When twenty-one was first brought to the United States, gambling houses dished out bonus payouts on certain hands to garner player interest. One of these bonuses was a 10:1 payout if a player’s hand contained the ace of spades and a blackjack – either the jack of clubs or the jack of spades. This hand was called a “blackjack,” and the name stuck to the game long after the special bonus was discontinued. In the modern game, a blackjack refers to any hand consisting of an ace and a ten or a face card, no matter the suits or colors.

Folks have been trying to work out the intricacies of blackjack for a while, but the first mathematically backed attempt to develop the optimum strategy was developed in 1956 by Roger Baldwin, Wilbert Cantey, Herbert Maisel, and James McDermott. The four published The Optimum Strategy in Blackjack, a paper featured in the Journal of the American Statistical Association, which would become the basis for all future attempts to further beat the game of blackjack. Beat the Dealer is possibly the most famous book on blackjack strategy, and author Ed Thorp utilized Baldwin’s calculations performed by hand to validate his basic strategy.

These days, blackjack is the most widely played casino game in the world, and it’s no wonder why. While it hasn’t been around as long as other casino games like craps, blackjack is probably the best understood and most heavily examined of all the games you’ll find on the casino floor.

Ready to dive into it, then? Head to the next chapters to get into the rules of blackjack, how gameplay works, and the strategy you need to utilize in order to make blackjack work for you and your bankroll!