Thanks to online slot players, casinos are incredibly prosperous these days. Slot machines alone account for more than two-thirds of the revenue these businesses make every year, and the figures continue to grow.

Because slot players are so valuable to casinos, it’s in their interest to keep their clients coming back for more. If you’ve ever played slots in places like Las Vegas or Atlantic City, you’ll see clear examples of how casinos do this; free cocktails, room upgrades, cash back; and, if you’re an online slot player, these rewards tend to come in the form of bonuses, free spins, and comp points if you’re part of a loyalty club.

Mind you, it’s not only slot players that bring in the bucks. Casinos also cater rewards schemes to players of table games like blackjack, roulette, craps, and especially poker. At online casinos, video poker games are one of the most popular, but the people who play them receive far fewer comp points and rewards than slot players.

Why is this the case? It’s not uncommon for casinos to use rating systems that assess how often a person plays slots and how much they win. And because slot players tend to fork out far more in bets on these games, they accumulate points much quicker than those who play video poker. 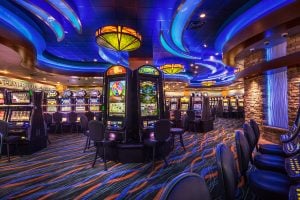 Why Do Video Poker Players Get Less?

The difference in comp points is even greater at some casinos. Slot players have been known to receive up to 10 times more comps than video poker players. Some casinos don’t award comp points at all, even to high rollers.

This wasn’t always the case, though. Video poker players earned far more in the early days when casinos would dish out rewards for playing electronic games; taking home almost as much in comp points as players of slots.

So what changed exactly?

It mostly comes down to the respective payback percentage of slot machines and video poker games. The expected returns on profits these players make also play a factor. To put this into perspective, let’s do a little math.

Say someone is playing a game of Double Bonus Poker, which has a 99% RTP if played optimally, the player is placing bets of $1.25 for each hand, at five coins per hand on a 25-cent video poker machine.

Then we’ll assume a different player is wagering 3 cents per payline on a machine with 40 paylines and a payback percentage of around 90%. This works out to be $1.20 per spin, which puts both of our two players on the same level in terms of betting.

Now, if each player were to play 500 times per hour, this would work out at $625 in bets for the video poker player, and $600 for the slot player. So what are the losses for each one on average?

Slots – The slot player will incur losses of $60 an hour on average. Regardless of whether they have a few winning spins in that timeframe, most of them will be losses.

Video Poker – As the video poker player is playing a machine with a 99% return, they will incur losses of $6.25 per hour on average. Of course, they’ll probably win a few times, but even if they were to hit four aces and a kicker or a royal flush, they’ll still lose an average of $6.25.

The fact is that the slot player needs to play and lose around 10 times more than a video poker player for this to equal out. As the difference in the money spent and losses between the two is so great, this is the primary reason why slot players receive far more rewards.

What If You Bet Less On Slots?

The above example is based on a player placing the maximum bet per line, however, not all slot players feel comfortable doing this. So how would this scenario change the average losses for a slot player against a video poker player?

Let’s go through the same equation again, only this time we’ll assume the slot player is betting $0.01 per payline instead of $0.03 per line at 500 spins per hour on a 40-payline slot. They would wager only $200 in total per hour in this case and see an average loss of $20 per hour if the machine has a 90% payback percentage.

That still works out to be three times as much as what the video poker player will lose on their Double Double Bonus Poker Game, even if they were betting $625 an hour.

Some casinos tend to offer multiple comp points on special occasions. If you notice such offers, you should snap them up because not only can they boost your existing comps, but they can essentially give the payback percentage of the game you want to play a huge boost.

If you opt to play video poker on these comp point days, you could turn over a much higher profit than normal. The same can’t be said for slots because these games already have a high payback percentage and you still need to bet a certain amount and play frequently enough to qualify for comps.

This has resulted in many casinos offering different multiple comp point days for both slots and video poker games, which now allows players to accumulate points at different rates.

Let’s create a scenario around this so we can look at how it might work for a player. Assume a casino has a player rewards club, which is set up in a way that you’re awarded a point for every $4 you bet on a game. Let’s also assume that the casino allows you to redeem $1 for every 100 points you accumulate – $400 gives you back a dollar in cash, returning 0.25% of your wagers.

In reality, this would effectively increase the payback percentage for a Double Double Bonus Poker machine to 99.25%. The payback rate on a 90% penny slot, however, would only increase to 90.25%, which serves the casino much more compared to what it would have to dish out in points on video poker.

What If The Casino Gave Back More?

If the casino was to offer a comp points day at 5x the normal rate, both players would benefit much more but the casino would certainly be doing itself an injustice on the video poker side of things.

Slots – This would increase the RTP for that game to 91.25%. The casino would still make a nice profit from the player’s losses if it were offering 5x points for a day. Couple this with the marketing value, it would probably generate more revenue compared to a single-points day campaign – even if the machine had a higher payback percentage.

Video Poker – For Double Double Bonus Poker those extra 4x points given for a game that usually returns a standard 0.25% into having a 100.25% return rate. That’s a huge profit-making opportunity for players and a big kick in the teeth for the casino.

On certain variations of video poker like Jacks or Better, these games have higher paybacks as it is, and the potential to make a profit would be even more. If you were to play a game of 9-6 Jacks or Better, the payback would jump from 99.5% to 100.75%. On some versions of Deuces Wild, it would go from 99.7% to 100.95%.

So, as you can probably now tell: casinos base their rewards system on a few different factors. Video poker may require you to bet $8 per game instead of $4 just to earn a comp point, which then reduces the standard return from 0.25% to 0.125%.

The casino might also limit days for multiple points to only 2x or 3x for playing video poker while offering much higher for slot games. It might also decide to reduce comp points or offer nothing for video poker games that pay back 99% or more

In doing so, the casino makes sure all of the players that bring them the most profit get the bulk of the rewards – who of course, are the slot players. This also prevents video poker games that normally bring in a marginal profit from turning into a losing proposition for the casino.